Ok, so maybe that is a little ambitious…….don’t expect the meaning of life to be revealed or anything like that, but…………

So, meet Marvin the Meerkat!  (Yes, that’s his name….he seemed to acquire a name even before I’d finished making him…..don’t ask)

Marvin is made from the meerkat pattern in the irresistible book ‘Knitted Meerkats’ by Sue Stratford (published by Search Press) and my version is knitted in two strands of Rowan Kidsilk Haze in shades #652/Mud and #658/Fudge for the body (one strand of each, held together to give a slight marl effect), which is a darker colour than the Debbie Bliss Angel in the book, because I thought it looked more realistic.  As a result I chose a darker brown for the eyes, ears and tip of the tail (Debbie Bliss Angel#15024/Mocha) to contrast with his sandy coloured body.

I knitted him pretty much as per the pattern, although I did swap some decreases for alternatives in the interest of symmetry (I’m fussy) but this is by no means necessary.  I also used little silver lined beads for his eyes rather than black, simply because that was what I had to hand.

I spent ages trying to get his features right and sew on his legs evenly (not my favourite bit) but it was worth it.  His eyes were a bit of a faff though and I think if I made another I would knit little circles for the eye patches, rather than the squares that the pattern instructions give you, as you only have to make them look circular when you sew them on later.

Isn’t he cute?  I think all the faffing was worth it 🙂

Have you got my best side?

So, to the winners of the competition.  Thank you all for entering!  As nobody guessed correctly I have decided to give the prize to the two people who guessed that it was an animal before I revealed that was the case in ‘Can you guess what it is yet – final clues’ those people are andresue (who has a lovely blog here) and woodlandknitter (who has a lovely blog here) – you should both receive an email soon, congratulations!

Hmmmm……..Marvin looks a little cold……..perhaps I ought to make him a jumper?

………………well, as nobody managed to guess correctly, I’m going to pick the closest guesses, and those people will all receive a copy of Moon River!  So there will be two winners, as two of you managed to guess it was an animal before the last post (in which that was made common knowledge).

I’ve not actually finished the mystery animal yet (sewing up gremlins!) but all will be revealed (including the winners) as soon as it is done (hopefully by the end of the week!).

I’ve had lots of good guesses from you all so far, but nobody has got it quite right yet, although a few of you are getting warmer!

So I thought I would give you a few more final clues (remember, you can enter as many guesses as you like before 23:59 GMT on Friday 18th January 2013)………

So, as many of you have already guessed, it is some sort of stuffed animal (yes, I know, very silly – but CUTE!), but what animal exactly???

I’ve now knitted all the pieces, but not sewn them together, so at the moment it all looks like this: 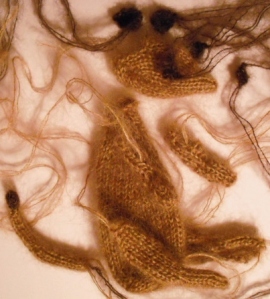 Can you guess it yet?

If you want to have a look at the rest of the clues check out these posts from earlier:

Can you guess what it is yet?

Can you guess what it is yet? More clues!

The first person to correctly guess what I am making wins a pdf copy of Moon River!

To enter, just leave a comment or fill in the form below with your guess before 23:59 GMT on Friday 18th January 2013.  You can enter as many different guesses as you like.

Your details will remain private and will not be shared with any third-party, or used for any purpose other than to notify the winner.

The winner will be notified over the weekend, and my decision is final.  Prize will be sent by email/Ravelry as appropriate.  No alternative prize/money is available.

As no-one has guessed it yet, the prize of a pdf copy of Moon River is still up for grabs!  First person to guess correctly what I am knitting wins!

This is what I’ve made so far, and there are a few more pieces to make yet!

What could it be?

For the other clues take a look here

If you think you can guess, just leave a comment in the form below.

First correct guess wins a pdf copy of Moon River, and my decision is final.  I’ll give you until 23:59 on Friday 18th January 2013 to leave your guesses, and you can enter as many times as you like if you have more than one guess……..Good luck!

What do think this yarn is for……? 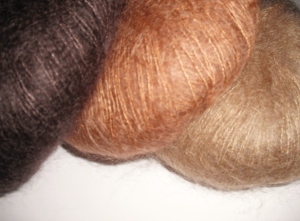 I’ll give you some clues to what I’m making……

Can you guess what I might be making?  Leave a comment with your guess before 23:59 GMT on Sunday 13th January.

The first correct guess will win a pdf copy of my Moon River pattern!  Good luck! 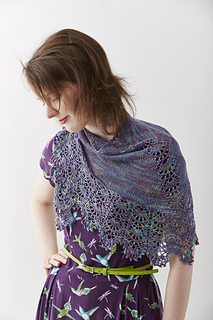