You know when you’re so busy that even eating and sleeping seem like an inconvenience?  Well that’s me at the moment!

I’ve been rather busy over the past few weeks, which unfortunately means that I’ve had to neglect you (through necessity rather than choice).

But what’s so important that I don’t have time to post?  Well, unfortunately all I can tell you is that I’ve been working on a new design, and I can’t show you yet – sorry!  But as soon as it’s published I’ll let you know.

In the mean time I have become a little over optimistic.

The trouble with working in a yarn shop is that you are always in the way of temptation, and it is almost impossible to resist for very long.

So, even though I have no time to knit at the moment, that mad impulse that says: ‘One ball won’t hurt – and just think, you’ve already got a couple of balls of that sock yarn at home and if you got another you could do that project that you’ve had your eye on…. all that yarn you’ve already got?  Pah!  You don’t want to knit with that right now, you want something new and exciting!  ‘ is winning and before you know it you’re thinking ‘If I did get that I would have enough to make that project… ‘ or ‘It’s only one ball and isn’t it a pretty colour… ‘ despite the fact I have NO TIME right now to knit anything for myself and ahem a lot of yarn already…. 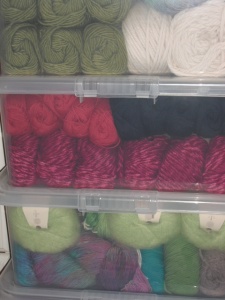 So what did I succumb to?  Noro Kureyon Sock yarn.  It’s being discontinued 😦 and the colours are so nice I just had to have some.  If you want a bit there might be some left here, but hurry, it’s going fast!  If I ever get round to making anything from it, I’ll let you know!

And after all this madness?  Well you might think that I would have a little rest, and get knitting that sock yarn, but no rest for the wicked!  I’ve another design to work at now, so there’s no let up for the moment!

What’s your one yarn weakness?

Hello, and welcome to my brand new blog!

I start my first post in a rather over excited mood, having just released my first self published pattern:

I’ve had patterns published before through my work with the lovely people at Artesano yarns (do pop over to their website if you can and sign up for their newsletter, which includes free patterns), but this is the first time that I’ve taken the plunge and done the whole process from idea, to knitted sample, to pattern and layout, and finally to publishing, by myself, although I did have some help from my friend and colleague Les, who very kindly test knitted and pattern checked for me, making this gorgeous version of Moon River in the process:

Moon River is a little crescent-shaped shawlette with a simple crochet edging that should be manageable for even those new to crochet.  It is worked from the bottom up, then shaped with short rows and decreases into a gentle crescent shape.  I’ve also incorporated shaping into the tips like this: 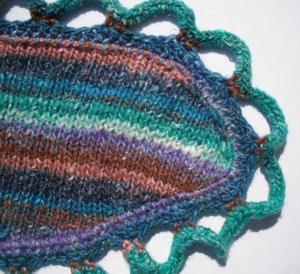 Shaping at the tips of the shawlette

The whole shawlette is then edged with a simple scalloped crochet edging.  Et viola!  One pretty little shawlette that shows off the beautiful colours in just 2 skeins of Noro Silk Garden Sock yarn.

Moon River is available to buy on Ravelry or here:

I hope you like it – I would love to see your own versions!

Thanks for taking the time to pop over and have a look, I hope that you might become a regular visitor.