Eek!  It’s been over a week since I last posted, and that certainly wasn’t the plan.  But why has it been so long?

Well, last week was a Bank Holiday Weekend in the UK (so we had Monday off – yay!) and I was looking forward to it.  I had ideas for swatching and sketching that I wanted to get done and I had it all planned out.

Sunday: Do sketches for the swatches that worked.

Monday: Relax!  The work is done!  Wayhey!  Maybe write another blog post if you feel like it.

As you’ve probably guessed by now, this was not what happened.

Wake up!  It’s a nice sunny day and Spring or Summer or something resembling it looks to have arrived!  Be happy, you’ve been waiting for it since March (when we had six inches of snow)!

Have breakfast in a sunny kitchen.  Decide the sun is maybe not agreeing with your eyes.  Feel a bit of a headache starting.  Take paracetamol.  Ignore it.

Develop killer migraine that makes you feel not only headachy, but nauseous every time you move.  Even if you just move your head.  Like you’re on a boat (and as anyone who has ever been on a boat with me will know, I am really not a good sailor.  I get seasick on lakes.  Calm lakes.  Even when the boat hasn’t set off yet, but is just rocking slightly as other people get on.  Urgh.).  Draw the curtains and put on sunglasses because you can’t stand the light.  Wonder if you’ve become a vampire.  Feel frustrated and awful.  Get nothing done.

Monday: Feel slightly better but still pretty awful.  Spend all day trying to decide how to finish a swatch, when it should only have taken an hour.  Meh.

As a result I’ve spent the rest of the week trying to make up for lost time (in between going to work) and finally got finished on Thursday.  *Sigh*  Obviously I can’t show you any of the swatches, but I can show you this, the unseen side of knitwear design: 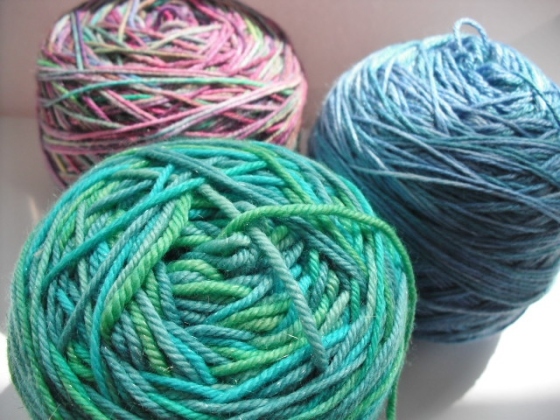 These cakes of yarn have dangling from them on circular needles all the swatches that didn’t work out (I did these before last weekend).

This is the thing I hardly ever see written about knitwear design, the rubbish half-baked ideas that didn’t come out right.  (It’s not helped by the fact that I am so picky.  If I don’t love it, and I mean really love the idea, so much that I can’t wait to cast it on right now, then it doesn’t see the light of day.)  I’m sure everyone has them – well I hope so – but it is rarely acknowledged that one of the most important things about designing is know when something just isn’t working and knowing what to leave out.

You have the perfect vision in you head, but somehow it just doesn’t want to come out of your head and on to your needles.  What makes it onto your needles is something that isn’t quite there yet.  Something that still needs work.  Either the yarn isn’t right, or the stitch you’re trying to invent is messing with your head, or just didn’t look how your fantasy design did when you dreamt it up.

I’m not going to show you the swatches, because there is still mileage in them yet, and I’ll probably frog them (the yarn is too nice to waste) and try again.  They are really the evolution of an idea.  I think they’re getting there, but maybe the idea just needs a bit more brewing time.  When it’s had the time it needs to simmer in my head it might just become really exciting.  I’m holding out for that moment.

Hopefully this weekend will be better than the last.

I blame the vampires.

P.S. In an exciting development, my Moon River Shawlette was mentioned on the Noro Yarns Facebook page today!  How exciting!  You can check out the Facebook page here and Moon River is available on Ravelry here