The parade of projects I’ve made while absent from my blog continues!  I’d planned to post this last week, but working on exciting new things has rather got in the way….. but more about the first of those things tomorrow (I know, making you all wait, I’m such a tease).

A few months ago, Knit Now magazine dropped through my letterbox, with a fun little surprise…. a knitting kit!

Now, I’m not usually one for making stuff that comes free with magazines, because usually (wild generalisation alert) the yarn is not especially nice and I don’t particularly want to knit or wear anything made of acrylic when I have a stash of much nicer yarn, just waiting to be knitted up and more ideas than I have time to make (there’s no pleasing some people).

But this kit was different.

For a start the yarn was wool blend and actually quite nice!  and then there was the pattern (Finlay Fox by Barbara Prime), which was more cute than I could handle.  Also, I had some spare safety eyes and toy stuffing in my stash from making a pair of PG Tips/ITV digital monkeys way back when.  I’d just finished a big knitting project too (more about that next week) and wanted to make something quick and slightly silly so it was just meant to be!

First there was a body (knitted flat, with an intarsia patch for his pale tummy):

Then a bushy foxy tail, some cute pointy ears and little arms…… 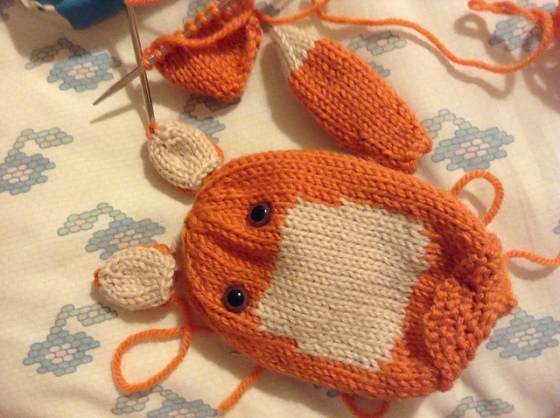 I decided to sew each piece up as I went along, because although I don’t hate sewing up, or fear it at all, there’s always quite a bit of making up involved in toy patterns, so it doesn’t seem quite such a slog or a test of endurance if you space it out a little. 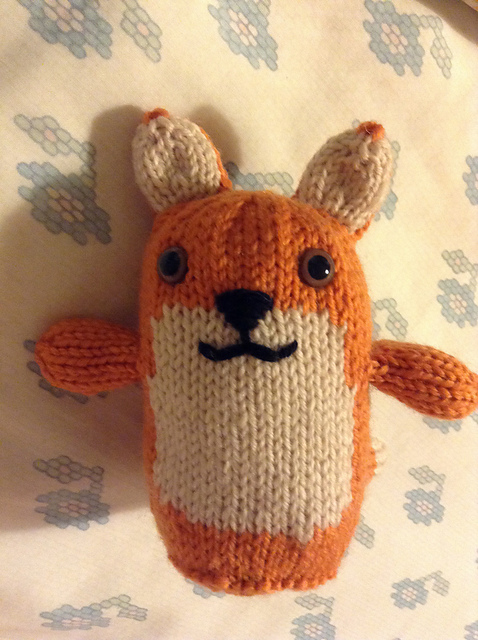 I’m particularly pleased with his expression.  Normally I spend ages sewing facial features on to toys, only for them to look weird, so I have to start again.  This process is repeated until either a) I’m happy with it, or b) I’m so sick of the sight of it that I don’t care any more.  I think it’s only been the latter once before, but I do tend to persevere, even if I’m pretty fed up with it, because I’m a perfectionist.  On this occasion I got it right first time!  Yay!

Then, inevitably, I had to name him.  Or, to be more precise, somebody did.  The task fell to my brother (the prospective owner), who decided on Fred, because alliteration is the best strategy for naming such things!

I even took Fred to work, so everyone could have a good gawp at him.  Here he is enjoying some lovely colourful yarn!

Isn’t he cute?  You can see Fred on Ravelry here.