As you will have gathered by now if you are a regular reader, I don’t get much time to knit for myself (my monumental stash is a constant reminder of that), but when I do, I am quite a selfish knitter, mainly because for once I want to knit something that I get to keep!

Designing is great fun, and I get a buzz from knitting up things that previously only existed in my imagination, but the downside is that sometimes you don’t get to keep the samples at all and if you’re lucky you might get them back after a few months. Although I am used to parting with my samples now (even if only temporarily) sometimes it is just nice to make something that is truly yours.

All this makes me very unlikely to do any gift knitting. Mostly I just don’t have time to get it done before Christmas or someone’s Birthday or Mother’s Day etc. If people get knitted gifts from me it is sporadic and usually they just get it when it is done, rather than for any particular occasion. If I plan a knitted gift, it will usually be an ‘extra’ surprise in addition to a suitable gift, so that if I don’t get it done on time they still have a present, that way no-one is disappointed and when the knitting is done, they get another surprise and I get the bonus of not feeling guilty or stressed trying to do that last pattern repeat at 2am on Christmas Day.

For example, this Ishbel was meant to be for my Mum for Christmas:

But it didn’t get finished until a few days after, as I had deadline knitting to do in the run up to Christmas. She did get it in the end, as well as a normal gift on Christmas day itself, so all was not lost, but given that I had attempted to be as organised as possible and cast this on in September (!) you can see why a knitted gift alone is not an option. (She loves it 🙂 so it was all worthwhile!)

However, it seems that I am unusual in not gift knitting on a regular basis. Most knitters are exceptionally generous with their time. Many of the customers I serve at work are buying yarn to knit something for someone else, but some knitters have horror stories of gift knitting.

The perfect hat that was lost on the train. The intricate sweater shoved in on a hot wash and felted beyond all recognition. The cardigan that only ever sees the light of day when you come to visit, or worse, is being used as a dog blanket!

Nobody wants this to be the fate of their gift knitting!

Why should you waste your valuable skills, time, effort and money on unappreciated gifts, when you could buy something and save yourself the heartache? Why do we allow ourselves to be trampled over and our knitting be under valued?

I have to admit to being guilty of this myself.

Last year I knitted a little cosy for my Dad’s iPod. He didn’t have cover for it, I had a bit of yarn left over from another project and I thought it would be nice to make a cosy for it. I designed it specially to fit in lovely red Debbie Bliss Baby Cashmerino, but I didn’t ask him if he wanted it. Big mistake. He was mildly pleased when it was finished, but a few months later it was unceremoniously jettisoned in favour of a cheap imitation leather case from a supermarket. I rescued it and gave it to my Brother (a much more appreciative recipient). Thankfully this was just a tiny item, but imagine if it has been a sweater?

In the past I have also made my Dad a hat which he never wears and a scarf that he rarely wears, but has still managed to ruin with Velcro. All of these were designed just for him, but basically I should have learnt by now that he just isn’t interested in anything knitted.

So, as some of you who are freakishly organised may already be planning (or even already started) your gift knitting ready for Christmas, I thought it was high time to find out if you really should knit that gift. No more wasted efforts for us, oh no.

We will not be taken for granted! If you want something knitted from us you have to earn our respect!

I give you the flow chart of truth (all together now… oooooooooh!): 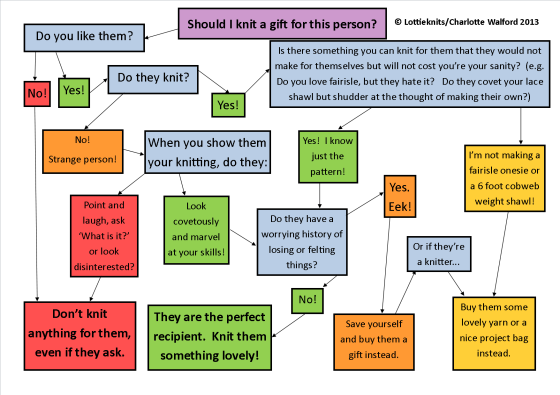 If the flow chart says no, it means no! Don’t knit anything for them, even if they ask. (O.K. Well maybe if they ask nicely for something in particular – gah! I’m weakening already!)

The likelihood is they’re not a knitter, so if they plead, mention the cost of nice yarn and the time involved in you making it and how horribly busy you are, so it would take you oooh…. maybe 2 years if not more. If you feel yourself weakening, imagine the potential recipient losing or felting your beautifully and painstakingly knitted labour of love and just say no!

Note: these arguments are harder to sell if you often knit gifts. In this case you might want to mention some other projects (for the more deserving) that you are currently working on and emphasise how little time you therefore have left to knit anything else.

14 thoughts on “To knit or not to knit, that is the question!”